We are now 3 weeks from the launch of our Kickstarter Campaign and don’t we know it!

In terms of the game itself, we have been working mostly on gameplay. New items are being implemented daily to give you a great starting catalogue of objects and scenery to use in your map building, and we’ve added two new biomes which look fantastic!

We’ve been working on our character models to make sure they all move the way they should, we’re at the stage of adding the different customisations for the characters, plus we’ve nearly finished our printable character sheets and we’ve now added ‘Luck’ as a stat to VoxStory to add intrigue to your game.

The clever team that does all our coding have been working on so much recently. We now have a trailer camera so you can pan into new areas and show off your creations to your players. You can take a screenshot by pressing Alt and S, something so simple yet so useful. Maps have been optimised and now support 175X175 map tiles. The login screen has been updated which we absolutely love!

Our in-house storyteller has started to build VoxStorys opening campaign, we think it’s a great little starting adventure, we hope you agree!

PR has been busy talking to people within the gaming industry about VoxStory, such as Andrew from geeknative.com. Andrew ran a fantastic article on VoxStory back in May which you can read here and more recently Keith of Temple of Shadows Gaming posted a youtube video about VoxStory which is available to watch here.
The PR team has also been putting together our collector's edition pack, which will only be available to buy as a Kickstarter reward. We will be releasing sneak peek pictures of this on our social media platforms in the lead up to the Kickstarter.

With so much going on at the moment we know our updates have been lacking and for this we are sorry. Our focus has very much been getting everything right so we hit our goals and release an awesome and finished game, we don’t want to rush through development and make mistakes.

Thank you all for your patience and support. 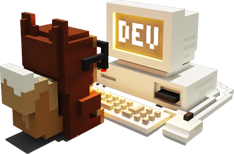 VoxStory and the VoxStory logo are registered trademarks of Current Year Gaming Ltd.